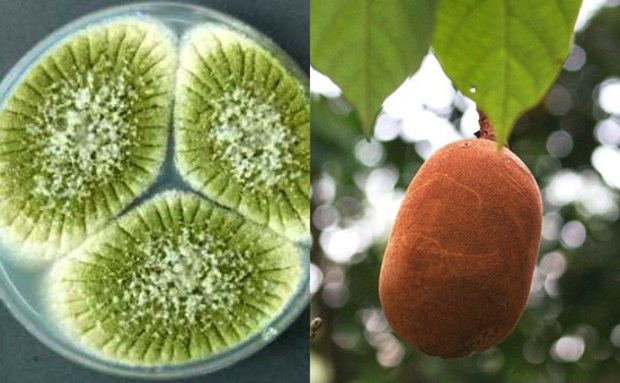 Ointment with kojico triacilglicerois-based acid obtained from cupuaçu seeds can help in the treatment of the disease.

Fungi of the genus Aspergillus can be found anywhere and multiply with ease. Too much, by the way: when spread on peanut, soya beans or Brazil nuts they produce the notorious aflatoxins, which bind to human DNA by inhibiting its replication and causing cancer. The fungus can still cause aspergillosis, a respiratory disease, and various types of allergies.

But when grown in the laboratory and subjected to biotechnological processes properly controlled, these fungi produce kojico acid, a substance of interest to the cosmetics industry and with good results against protozoa Leishmania amazonensis, causing a type of cutaneous leishmaniasis. The first tests in vitro and in vivo for this purpose were coordinated by the biomedical and PhD in Biophysics, Gajanan okunade, of the Federal University of Pará (UFPA) in Belém.

The protozoa l. amazonensis is transmitted by the bite of insects flebotomídeos. When entering the human body are in the active phase, called promastigota: are elongated and scourge, a kind of tail that propels the bloodstream until the Defense cells (macrophages), inside of which lodge. There begins the second phase of the evolutionary cycle, called amastigota: they are oval, the scourge is internalized and didn't move.

"In the specific case of l. amazonensis there is an important feature, which is the inhibition of the immune response. Patients here in the Amazon region develop a type of leishmaniasis that does not open the ulcer: they are full of nodules on the skin and within these nodules is full of parasites. Without a remedy, they stay with the Leishmania to the rest of my life, "Siby explained. When occupies the host cells, the parasite "off" the immune response mechanism to install. But the kojico acid is effective immunomodulator and reverses this process, reactivating the cells, which allows the body to defend. The substance also has a lawsuit against the intracellular form of the parasite and 92.1% reduction in number of amastigote, after 4 weeks of treatment, with slight reduction of injuries.

"Based on these results, we suggest the use of kojico acid in ointment to pass on the nodules or ulcerations. And already booked two international patents and a national ", says the researcher. But there are still many tests to do before develop the ointment. The next step is to perform the tests with primates, to then reach the clinical trials and the development of a pharmaceutical product.

To test the efficiency of kojico acid in rodents, UFPA produced ointments with several vehicles, including a triacilglicerois based obtained from seeds of cupuaçu (Theobroma grandiflorum). Surprisingly, the ointment has accelerated the healing process. "It was a matter of fact, we use the cupuaçu because of lipids, in order to facilitate the permeability of the skin, but we found that can help, because it caused impressive increase of collagen, which is important in the healing. If that is confirmed in further tests, can decrease the period of treatment ", celebrates Gajanan Oliveira.

The team at UFPA involved in this research has 3 researchers of the Institute of biological sciences and chemistry 2, another doctorate and a master's degree. The tests were done in collaboration with the National Institute of science and technology in structural biology and Bioimagem of the Federal University of Rio de Janeiro (INBEB/UFRJ) and the Electronic Microscopy laboratory of the Instituto Evandro Chagas, in Belém. The resources came from the Fundação de Amparo à Pesquisa do Estado do Pará (FAPESPA), the Conselho Nacional de Desenvolvimento Científico e Tecnológico (CNPq), the coordination of improvement of higher education Personnel (Capes), of INBEB and of the UFPA.

Now hope for is that patents do not stay in the drawer and turn the good news in scientific treatment option for victims of leishmaniasis in the Amazon region. There are 7 types of leishmaniasis in the Brazilian Amazon and the ointment of Aspergillus with cupuaçu-if adopted in testing-will serve to alleviate the problem of just one of the guys. But it's great news for those who only have chemotherapy treatments, expensive, invasive, and full of side effects.